A Nigerian content creator called Sisi Yemmie has advised women to have someone with them when it is time to birth their babies. Sisi Yemmie said this on her page on the micro-blogging platform, Twitter.

According to her, the person with such a woman must also be alert and follow the baby after she is out of the womb.

According to the mother of two, some corrupt nurses and doctors switch babies with healthy ones after collecting money. She noted that it is important for these women to pay attention.

This was how 2 dead bodies were taken out of our hospital today, Covid-19 is real – Nigerian nurse cries out

As expected, Nigerians took to her comment section to react to her post. While some noted the callousness in stealing someone else’s baby for another, other people stated that Sisi Yemmie’s tweet is true and even shared stories to back it up. 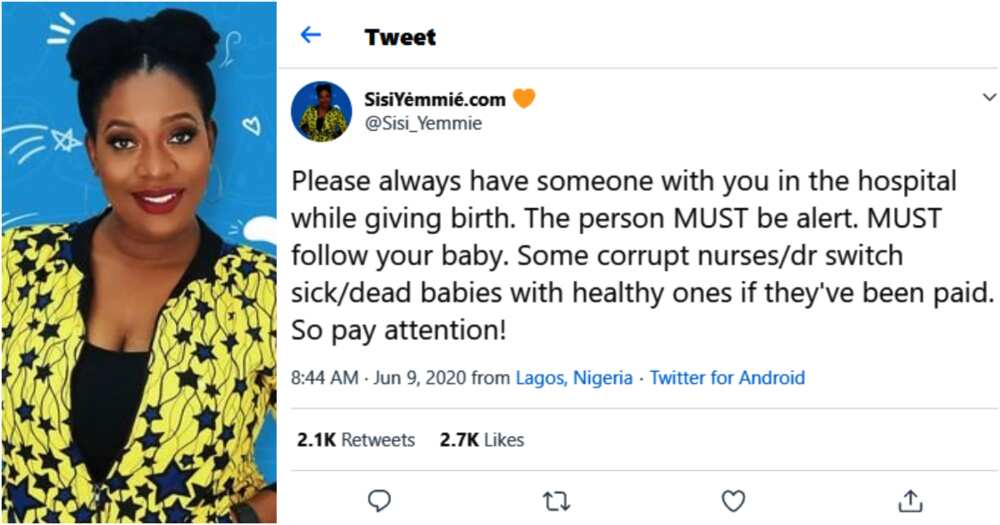 Blogger Sisi Yemmie advises women to have someone with them when it is time to give birth.
Source: @Sisi_Yemmie
Source: Twitter

Meanwhile, a lady called Ehi stated that the content creator’s advice was good but noted that she doesn’t see such a thing happening in the hospital where she works.

According to her, she works at a federal hospital in a rural town.

Responding to Ehi’s comment, Sisi Yemmie said that it is possible for her not to see such a thing happen but people whose children have been swapped will share a different story.

In other news, Legit.ng earlier reported that a 58-year-old woman who reached menopause 13 years ago allegedly welcomes baby.

The woman identified as Dorcas Osiebo had stopped menstruating 13 years ago without a trace of pregnancy but she never gave up on trying to have a child. She and her 64-year-old husband, Christopher Oseibo, welcomed their baby boy after 35 years of marriage.

The new mother said she was confused and excited when she was told by a nurse that she was with child.

#EndSARS: If I Didn’t Speak Up Against Police Brutality, I Would Be A Coward – Wizkid

admin - November 23, 2020
0
Two weeks after the death of Genius Kadungure, a Zimbabwean billionaire businessman better known as Ginimbi, another revelation has been unfolded about his...

admin - November 23, 2020
0
The people of Mokwa, Mokwa Local Government Area of Niger State has been left in mourning following the death of an officer of...

“What If Your Wife Cheated” Nigerians Reacts To 9ice Video Apologising To His Wife...

admin - November 23, 2020
0
A video which has gone viral, where Nigerian music artiste, 9ice was asking people to help him beg his wife, has received so...

#EndSARS: If I Didn’t Speak Up Against Police Brutality, I Would...