A video of a 15-year-old girl, who was smoking and then uploaded a video of herself in the act on  Twitter, has sparked outrage.

Although the girl deleted the tweet almost immediately, it had however been downloaded and has now become the number 1 trending topic. 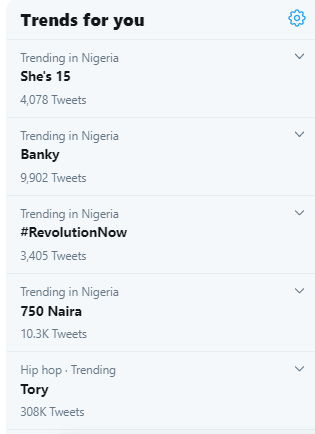 Wondering Why She’s 15 is trending?

15 Years old girl post video of her smoking on her twitter page and deletes but unfortunately for her the video was already being recorded pic.twitter.com/1Hbx0zbqyO

She’s 15 years old and she smokes weed?? My only aim at 15 was to be able to successfully pick money on the floor at parties

Shot taken by my humble self pic.twitter.com/myX8vMR7MC

Life is in stages and each stage should be enjoyed and not rushed.

Started driving at 13, but I wished I enjoyed the things meant for me for my age and started 4 years later. Driving is now a chore

She’s 15, she should be discovering herself, not how well she can blow a joint

She’s 15 and not naive. She already knew the dangers of social media before she thought about uploading that video of her on the internet. I don’t think she was pressured or anything. The moment she clicked the tweet button she accepted the terms and conditions. She needs advise.

I have seen people support some horrible ideas here just because they are tweeted by their favs.

She’s 15 and It’s legally/morally wrong for a 15yr old to smoke weed, no amount of wokeness would make it right.

Learn to disagree with your fav sometimes. No one will beat you.

Smoking is generally a bad thing for persons of all ages. She’s 15 now doesn’t mean she’s going to become a bad person and do criminal stuffs just because she is smoking weed.
You guys should chill cos most of us did things we aren’t proud of at 15. pic.twitter.com/tmkm71Ml60

anyway the Government is letting a new Police Law Bill be put in effect, but lot of us are concerned about “she’s 15”.

people are going to die more and you won’t be able to sue coz there’s justification now.

She’s 15 and smoking weed😭
God know say if na my papa she get. She for collect triple H smack down if he catch her.

She’s 15? 🤷🏾‍♂️
There are things you don’t just play with 😒😅 pic.twitter.com/BUSmptKgIz

Like did y’all deep how creepy & disgusting that is

Everyday there is always something stupid to argue about on twitter

many of the topics are not even worth debating on, cos the truth is too clear

She’s 15, you think at 15 it’s okay for her to smoke
I really wish this happened to her but she’s lucky

This is a result of such senseless and stupid arguments. pic.twitter.com/zDE6mcu4du

She’s 15 and is dragging weed without coughing 😳

ABOUT US
Funkode International is a company poised to serve entertainment to Nigerians and the World at large in a new dimension. We bring to you trends as they happen with our blog while managing entertainment in a cooperate way through Funkode Entertainment. Where we Discover Artist, Manage them, produce songs among others.
Contact us: funkodeent@gmail.com
FOLLOW US
© Funkode International
MORE STORIES